At the office, we're all pretty excited about the new Ghostbusters movie. Since none of us have yet got to the cinema to see it, the next best thing was to sit and think about what industrial products a team of paranormal exterminators might require. 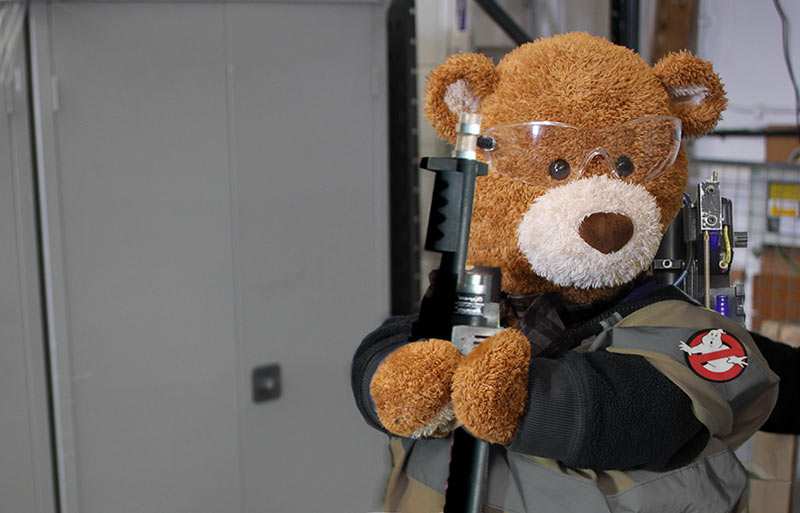 Everyone knows and loves the iconic flight suits, but you wouldn’t want to be wearing them on the way back to work. This means that any Ghostbuster HQ is going to require lockers, and what could be better than our plastic probe lockers? As well as a great choice of colours, their plastic construction with added anti-bacterial coating means that the slime will just wipe off.

With the magic of Google maps and street view, you can see the original fire station that housed the 1984 Ghostbuster crew , cool as that building is, we couldn’t help noticing that there wasn’t a car park. Therefore we’ve concluded that they would need some bike racks in order to allow them to cycle in to work and avoid the paid of finding a convenient parking space.

Again, the magic of the film would have been severely affected by anyone blocking the exit of the building, so that Ecto-1 couldn’t get out on to the street. A few of our 'No Waiting' cones would help fix that, and avoid any unnecessary delays in getting to the scene of the haunting.

One of the great unanswered questions; where do they store the proton packs when not in use? Unregulated nuclear devices tend to be heavy, and let’s face it, when they’re not being used, they should probably be kept off the floor. Some longspan racking with a maximum shelf load of 596kg (evenly distributed, naturally) should do the job of holding four proton packs when not needed.

Ghostbusting is a messy business, and although none of our spill kits are regulated for use with ectoplasm, they could probably do worse than investing in some neoprene drain covers to stop any of that slime getting into the sewerage systems (after all, we all know what happened in the sequel).

As the song asks; 'Who you gonna call?', but the song then fails to follow up with what would logically be the next question, 'Who d’you wanna to speak to?'. When you’re juggling a career as a Ghostbuster alongside being a scientist, chances are you’re going to spend a fair amount of time out of the office. Photo in / out boards will help keep track who is available and who is currently in the building and who is out at a library dealing with a troublesome apparition.